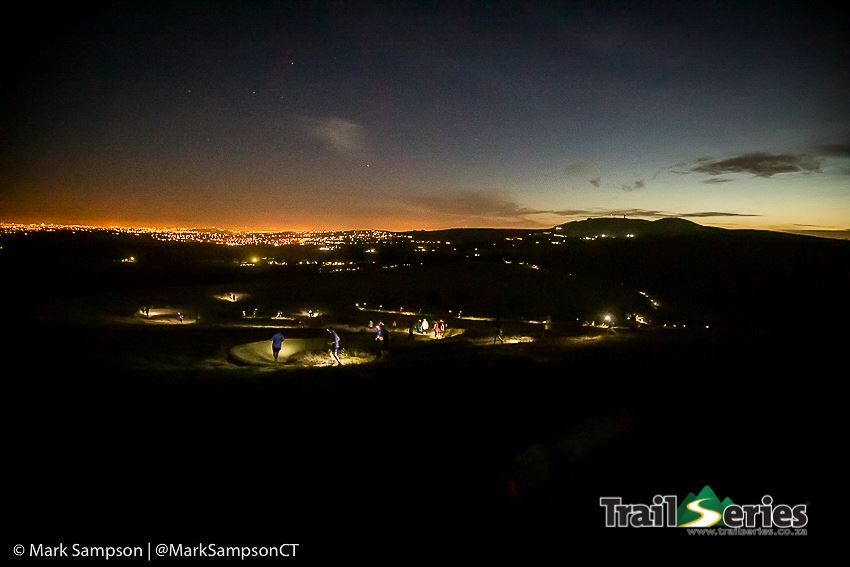 A little further out of the Cape, and a little later in the evening, Race 3 at Meerendal Wine Estate had all the ingredients of the perfect date. Pink sky, good tunes, good food, wine and twinkling lights. You could forgive MC Sean Robson for encouraging runners to look around for their singletrack soulmate on the start line… ‘Tis the month of love, after all.

Meerendal is usually the hallowed ground of mountain bikers, but was all ours for the evening. A course that includes a couple of rollercoasters and some infamous switchbacks along with smooth tracks designed for speed and fun. Warnings of numerous snake spottings on the course were relayed to the runners as they lined up, but that didn’t seem to slow the fast crew at all. As the Series® leader board takes shape, so the competitive edge sharpens.

There was certainly no bromance between Dylan Stevenson, Jono Black and Oriole Bolus as they headed out on the long course. Although Dylan let Jono get ahead of him for a while (to clear snakes off the path, he says) he caught him around half way to take the win in 52:30. Jono followed in 55:20, with Oriole of the infamous Muizenberg Trail Dawgs (we know this because they wear t-shirts that say so) rounding out the men’s podium in 57 minutes. Katja Soggot was untouchable in the women’s race, finishing in 1:01:40, with Julie Huckle second in 1:10:16 and Zoe Homel third in 1:13:08.

In the short course, we once again had some exceptional performances from our PeeWee and Minimee categories and we look forward to watching these names as the youngsters mature in to their trail running careers. Bronwyn George (19) flew in to the finish chute at a blistering pace, taking the win in a time of 24:26. 15 year old Cole Adams was 30 seconds behind him, followed by Cobus Hugo in 25:14. Tanya Posthumus-Fox secured her overall Series® win in a time of 28:12, followed by Bianca Tait, also first vet, in a time of 30:04. Rosslee Guess, who has performed consistently well throughout the series finished third in 30:15.

Other notable performances from the evening included 14 year old Jethro Dunn who topped the Minimee podium in a time of 25:53, as well as 10 year old Cullen Clark who scooped the PeeWee win in a time of 28:35.

Prize giving became its usual performance made up of trail banter, great prizes and the Muizenberg Trail Dawgs cracking open a Tafel Lager or two as the last of the twinkling lights came down to the finish line.

What comes next, is an exciting decision making process. If you are happy with your 3-out-of-4 race results, why not upgrade to the XL at Oak Valley on 25 February? 25km of absolute trail stoke in a breath taking venue, and a great way to finish off what has been a truly excellent Series® so far.

With thanks to the great brands and businesses that add so much to each event; Raidlight, Peak Performance Fitness, Steenberg, Mountain Dew and WWF.

A selection of images is on our website, with many more on the Trail Series® Facebook page! Full results are here.

Another spectacular evening of running for the Spur Cape Summer Trail Series® 2017 as runners chased down the sunset through the howling winds, otherwise considered a gentle breeze by all local Cape Tonians, on Wednesday night at Meerendal Wine Estate.

It was a first for the Spur Trail Series® at this new venue and proved to be hit for all who crossed the finish line. The view from the start/finish was a sight to remember as the runners wound their way up the beautifully cut switchback mountain bike trails, with Table Mountain and Lions Head lit up in the backdrop.

Racing kicked off at 19:30 for the long course, with all the racing snakes and serious faces lined up, up front. Current series leader and the hot favourite for podium step number one, was missing from the starting line, meaning there was a first place up for grabs.

Michael Davidson saw the gap and seized the opportunity for his first race of the series, flying through this fast paced course in a time of 45:48. After just missing the podium having to settle for 4th for two races in a row, Jarryd Dunn finally got his moment in the lime light claiming 2nd place for the evening, and coming in hot on his heels, finishing in 3rd place was Emmanuel Dlamini.

In the ladies race Sophie Cope kicked it up a gear, after two 3rd places in a row, she was hungry to move up in the ranks and sped across the line in first place in a time of 56:39. Another series favourite, Emily Yeo, came flying over in second place and taking the final spot on the ladies overall podium was Julie Huckle. 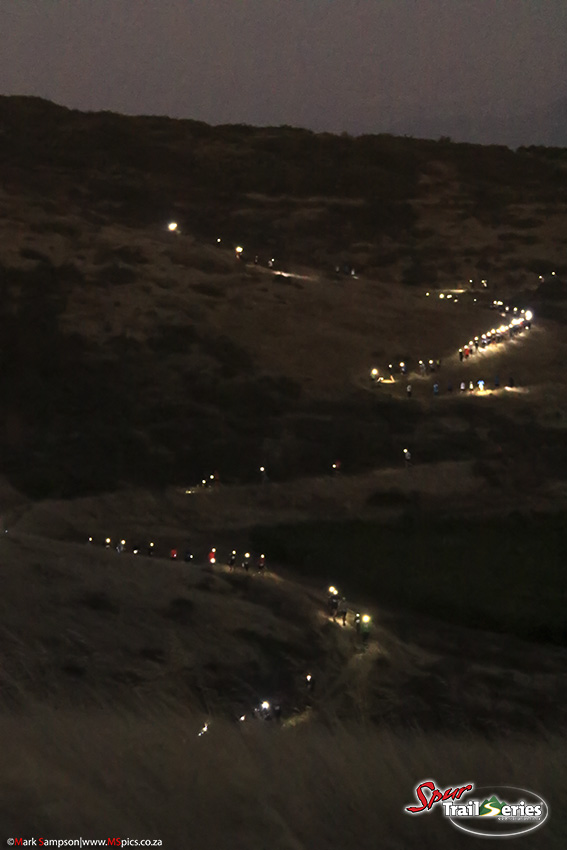 In the mens short course challenge, it was almost an identical podium as the first two races, as Dino Adams kept his winning streak going claiming his hat-trick win in an impressive time of 28:21. Making sure Dino had to run hard for his win, coming in right behind him to take his third 2nd place was Evan Fortuin. And wrapping up the men’s podium and newbie to this series’ podium was Gershon Aziza a mere 8 seconds behind Evan.

Watching all the headlights floating in the sky around the damn at the finish was such a great sight to see, even better seeing all the lit up grins crossing the finish line. Impressive running from all runners who took part. This surely was a night run to remember, and one to diarize for next year.

Click here to relive the moment and view some of the awesome photos from race night. (Or to suffer from a small case of FOMO)

A big thank you and shout out to all Sponsors and Partners who help make these races that much more exciting; Spur Steak Ranches, BOS Sport, Raidlight, Steenberg Vineyards and WWF run for nature.