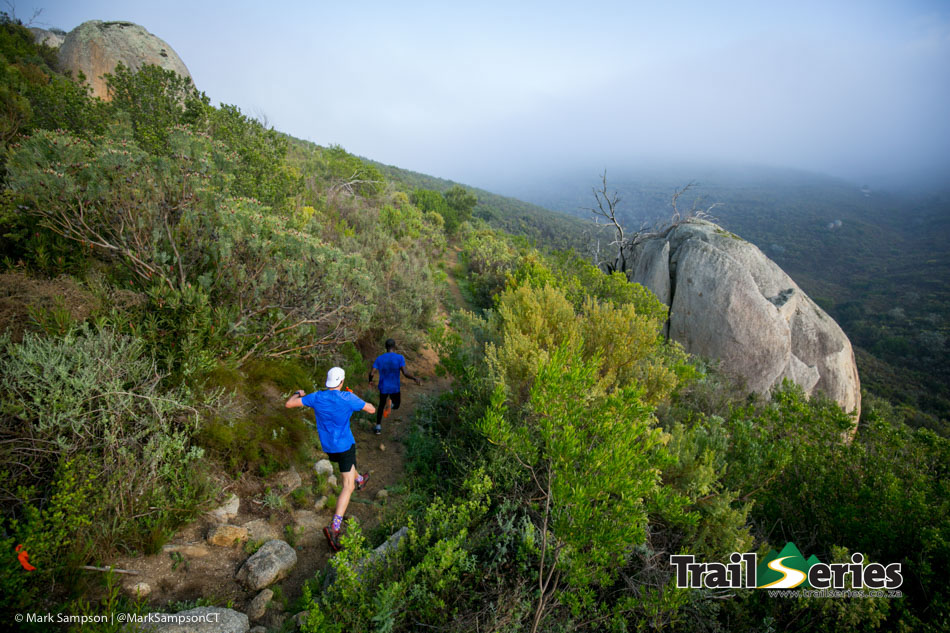 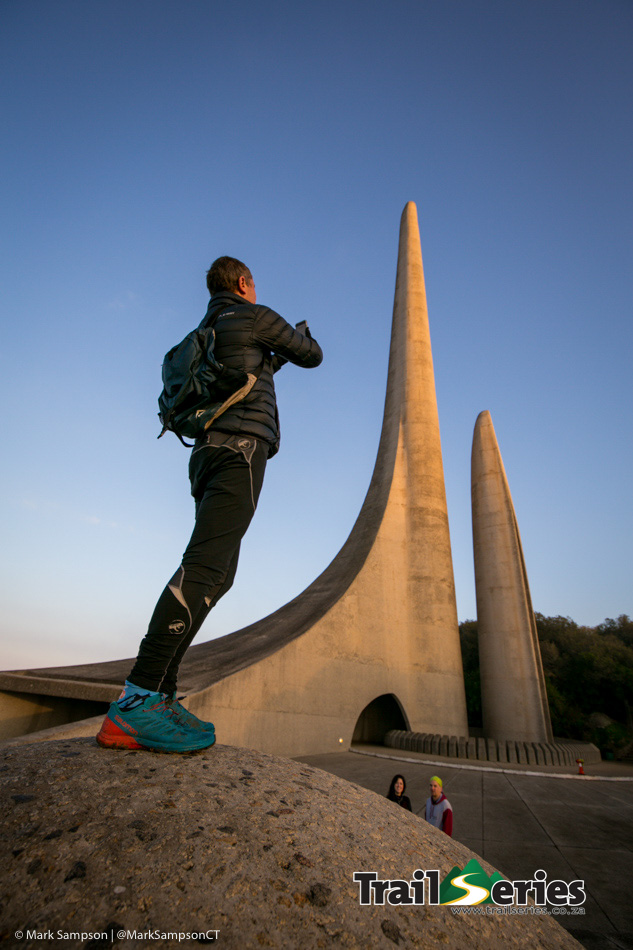 In the heart of Paarl, lies a serene and scenic reserve with dramatic granite rock formations, abundant plant and bird life, and some pretty good running trails! This was the race course for the near sell-out race three in the Cape Winter Trail Series.  It's the fastest race course of this four race series and it showed.  Runners gathered at the iconic Taal Monument from 7am in the misty morning light, pinning numbers and holding on to jackets, beanies and hot coffee for as long as they possibly could.

The 'A' batch in the long course once again featured Maties speedster Llewelyn Groeneveld, on the hunt for a third course record after nailing the records at race 1 and 2. Runners climbed from Taal Monument, in to the reserve where wild olives, rock candlewoods, waaboom trees and an abundance of other Proteas species lined the misty trails. The usual sweeping views from the top were marred by a bank of thick fog, but spirits remained high and the racing was hot. Groeneveld took the win, a full 5 minutes ahead of Peter Tsawayo, in a cracking time of 52:40. David Sher was just seconds behind Tswayo. Groeneveld’s effort wasn’t quite enough to topple Siviwe Nkombi’s 2016 record of 51:25. In the Championship Series, Tswayo and Sher go in to the final race tie on points for second. Groeneveld will undoubtedly be hunting a third course record.

In the women’s race, Kirsty Zeppel moved herself up to top spot on the podium, followed by Emily Djock and Carla Whitehead. Three women are in contention for second place as the final race looms. 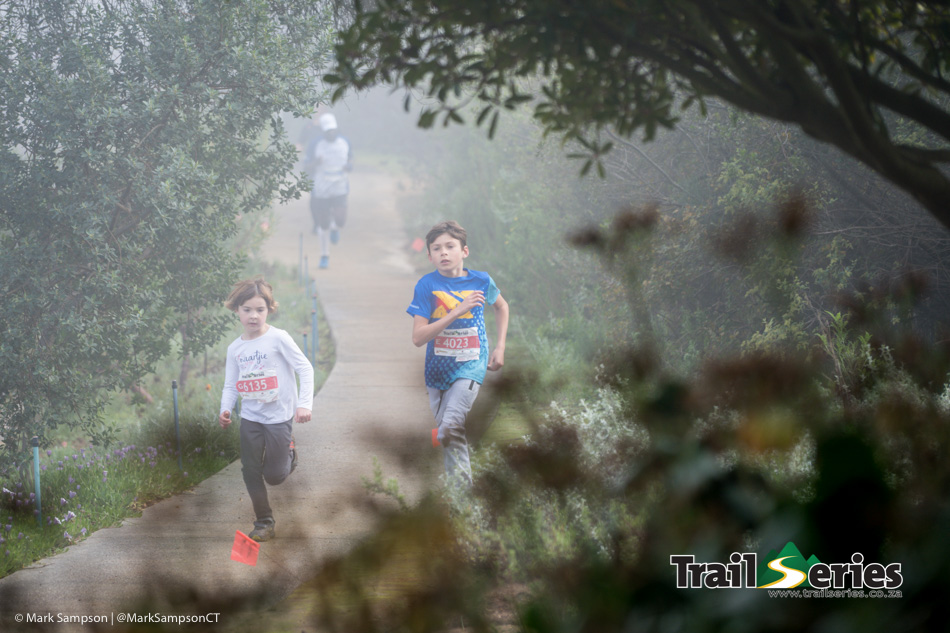 In the short course, Piettie Osthuizen smashed a win in 31:08, with Kelton Miller and (junior) Jethro Dunn not far behind. Nicola Wills took her third win, Kelsey Nel was second, and (junior) Grace Goodwin rounded out the podium.

Then, it was all about massages, breakfast burgers, hot coffee, jumping castles and an abundance of lucky draw prizes as the morning closed out and the fog finally lifted. 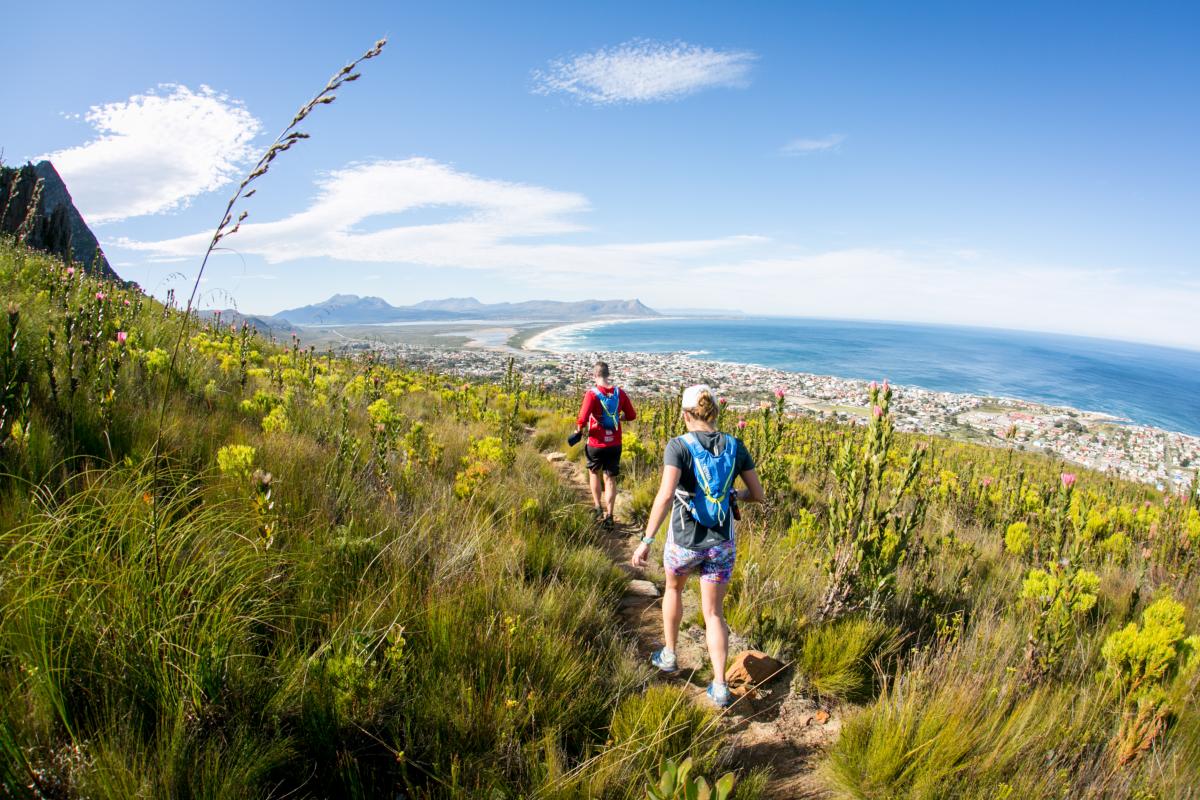 The final race takes place in the utterly magical Kogelberg Biosphere Reserve surrounding Kleinmond. This is as diverse a route as you can get with coastal pathways, forests and mountain trails complete withspectacular ocean views.  The weather looks clear, crisp and perfect for an escape to this part of the Cape on a long weekend. Choose between the 14km long course, the 8km short course and the added bonus of a 23km XL course, which is a separate, stand-alone race.

Online entries close at 8pm on Wednesday 7 August. Beat the queues and avoid disappointment by securing your entry now via

All provisional results are up. Please direct any queries to info@wildrunner.co.za

There are albums for each of the three races on the Trail Series® Facebook page – tag and share!